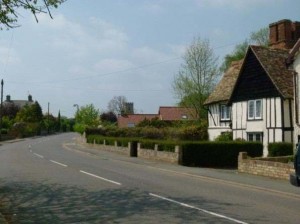 Hauxton is listed in the Domesday Book in 1086 as Hauochestun, even then having 27 households. There is however much earlier evidence of Beaker, Bronze Age, Iron Age and Roman presence here. Small communities settled by the ford over the River Cam, and built a mill. Swords, daggers, and human and horse bones have been found suggesting a battle took place. A brooch dating back to about 570 AD has been found, this being the year that King Edmund of East Anglia was murdered by the Danes. 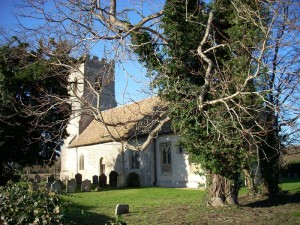 A small wooden church built in the 10th C was dedicated to him, later to be replaced in 1109 by the church we still have today, which is one of the oldest in East Anglia. The font dates from the 13th C. The nave was lengthened and the tower built in the 15th C and pews and pulpit added.

Pilgrims to Walsingham would pass through to rest and pray before crossing the river by the mill. Two side chapels built about that time were demolished in the 16th C and in the erecting of a rood screen, a fresco of Thomas á Beckett was covered over thus saving it from

destruction by Cromwell’s troops years later. After the restoration in 1666 three bells were put into the tower, where they still remain. In the early 19th C the church was much neglected, but during major renovations in 1860 the hidden fresco was discovered.
Today  the Benefice of Harston, Hauxton and Newton links the churches in these three neighbouring villages. You can find out more about this by clicking here. 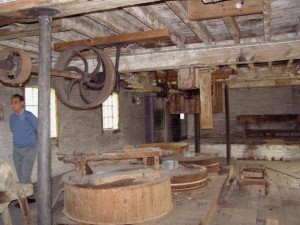 There has been a mill on the present site probably from Roman times. The heyday of the mill was in the late 18th C when it also crushed rapeseed for oil, and trading took place in corn, coal, tar, pitch and building materials at what was then Mill End.

London to Cambridge coaches passed through with two ale houses, The Ship and The Chequers, serving the passengers. It was still a toll road in 1800, the turnpike and keeper’s cottage being near the bridge. An old milestone dated 1729 can still be seen there marked with the Trinity Hall arms. A new mill built in 1851 after a fire, ground corn until 1974 when Turner & Son ceased trading. It is the only example of a 19th C watermill in Cambridgeshire. (The last miller is remembered in the Turner Crescent road name on the Hauxton Meadows development)

Records show a village school in the 1580s, and in 1846 a small Dame school paid for by farmers and landowners existed. Parents paid a penny a week per child. In 1870 the then vicar opened a school for village children. After 1928, 11 – 14 year olds went to school in Harston, then from 1959 to Melbourn.

Pest Control Ltd. was founded in 1939 by the entomologists Sir Guy Marshall and Dr. Walter Ripper, the latter a refugee Austrian scientist, then living at Harston. They began operations in 1940 from a disused garage near Hauxton mill. Its first business was contract crop spraying against insects. By 1943 the company had also begun to make insecticides, weedkillers, and sprayers, besides undertaking research. In 1945, the Hauxton site was selected as its centre for their manufacture and sale, which grew rapidly from 1950.

In 1954 the firm, then in grave financial trouble, was taken over by Fisons, which invested in much new plant at Hauxton between 1954 and 1958. After the takeover, Fisons Agrochemical Division bought 81 acres of land each side of the A10 and erected a large office block and laboratories just east of it, with factory buildings and stores behind, on a 13-acre site. The numbers employed, half of them office staff, grew from 409 in 1970 to714 by 1975. Only 70 were actually employed in production in 1972. The company subsequently underwent many changes of ownership and name with consolidation in the agrochemical industry. Sequentially it was known as FBC, Schering Agrochemicals, AgrEvo, Aventis CropScience and finally Bayer CropScience. The site was closed in 2004 and sold on to Harrow Estates (part of the Bridgemere Group) leaving a legacy of contaminated land which has now been remediated for housing and office development.

The war memorial stands in the grounds of St Edmund’s church. For details of the Roll of Honour, click here. In April 2015 the Hauxton war memorial was granted listed status as being of Special Architectural or Historic Interest for the following principal reasons: 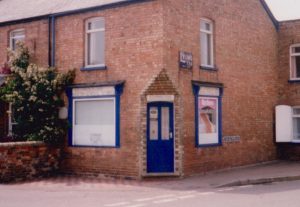 In recent years Hauxton lost its single general store in the centre of the village, owned by Peggy and Meyrick Arnold (see photo courtesy of Colin Fakes, taken in the 1980’s) but their contribution to Hauxton village life is recognised in the road name Arnold Close on the Hauxton Meadows development.  Other local families are also reflected in the new road names.

Warhorse author Michael Morpurgo lived in the village, opposite the village green, from 1969 to 1970.

Today Hauxton has around 690 people on the electoral register and is likely to continue to increase in size over the next few years with the Hauxton Meadows development on the old factory site.
(updated 21 5 2018)